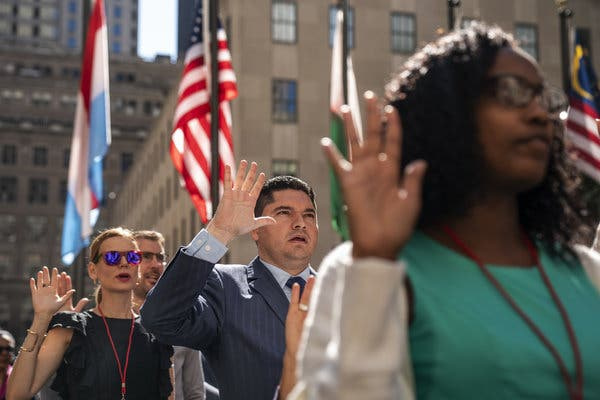 Asylum seekers – the headlines in the United States

Claims that immigrants are criminal

Donald Trump spoke during an event for families who have lost children as a result of the crime committed by immigrants who are staying illegally.

For us in Norway, it may not be important for each party’s representatives to win or lose in an American mid-range. But it says something about a nation’s attitude toward human dignity and rights.

Donald Trump has made immigration and relations at the border with Mexico top priority in the Republican election campaign before mid-November. Then all 435 members of the House of Representatives are on an election, in addition to 35 of the 100 members of the Senate.

Despite all the criticisms that the president has received from the whole world for the conditions at the border, where children are divorced from their parents when families try to sneak into the United States illegally, Trump believes that his “hard line” in immigration policy will gather most voters behind Republican Party candidates.

The fragmentation of families trying to cross the border – legally or illegally – has led to heartbreaking scenes where crying children remain standing while the parents are being taken away and the parents do not know where their children are.

He believes this is necessary to limit illegal immigration to the United States.
Its habit faith, do not trust Trump in the media reports and information from the border with Mexico. And when in recent weeks there has been tougher criticism than anything against American policy on the border with Mexico, Trump maintains that he will not allow any milder form of reception of asylum seekers at the border, whether they have children with or not.

United States a Dream Country to Live In

Norwegian has the world highest salary

United States a Dream Country to Live In

Work and Residence Permits in Norway

How to find and get a job in Europe?